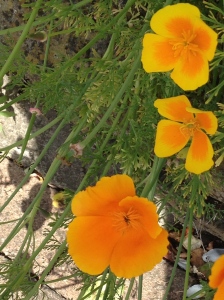 A lot of England’s Saxon Towers were commissioned as Norman forts after the Battle of Hastings and monastic communities grew around these buildings.  After Henry III reign a stability came to Engand and after 1400s the old Forts went into disrepair as they were not needed and in some cases the monastic life that had gone before dissolved.  The once grand Oxford Castle, where early teachings by monks flourished, is an example of this.  Oxford Castle later became a gaol and one pre Victorian sketch of the walls has the words ‘The Gaoler has a beautiful garden’ written on it.  These building be needed as gaol’s during the civil war

However a stronger force to push the religious orders out of their buildings came later on.  The Dissolution of the Monasteries describes the administrative and legal processes between 1536 and 1541 when Henry VIII disbanded the monasteries.

Whilst religious buildings were destroyed a number of Priory gardens thrived and turned into what we still enjoy today as Physic gardens.  Monks were known to grow plants for healing properties as well as sustainable food for their tables.  The long lawns were created to instill tranquility and meditation for prayer.

These recent posts explain the people (both powerful and humble) who made this happen during the 17th century.  Thanks to their insight and action, British Physic gardens would continue to give us nurturing natural remedies for centuries to come

The seventeenth century saw the sale of many old priory buildings, including the Lewes Priory.  In early medieaval times this had 100 monks but numbers reduced to 24 just before it was dissolved by Henry VIII.  The first lay-owner was Thomas Cromwell who, between 1537 and 1540, built a country house (Lord’s Place) on the site of the
Prior’s Lodging; this later passed into the hands of the Sackville family.  The Sackville family were the last to own the house built on the site by Thomas Cromwell (after the dissolution). This was then sold in 1668.

Lewes was the first Priory in England belonging to the reformed Benedictine Order of Cluny, based in France.  Lewes Priory was founded by the Norman baron William de Warenne between 1078 and 1082 on the site of a Saxon church dedicated to St Pancras. The main buildings, including the great Priory church, were put up in Quarr Limestone in the Romanesque style between c1082 to c1100 and in Caen Limestone from c1145 to the 13th century.  It was occupied by the troops of Henry III at the Battle of Lewes in 1264.

Buckfast Abbey Gardens survived against the odds.  The large monastery that flourished at Buckfast  in 1018 was surrendered for dissoilution n 1539, with the monastic buildings left as ruins.  The modern Church that stands on the medieval site today was built in 1938 by the monks (four monks did most of the work) recreating Lavender, Sensory and Physic gardens.  The lavender garden contains around 150 varieties of the species.  The plants are formed into rounded domes.  In summer they fill the precinct with their scent, attracting bees and butterflies.  Beyond the bank of trees lies the Abbey’s farm, covering some 300 acres and given over mostly to arable crops and grass for animals to graze on.

The only portion of the medieval monastery which survives is the “much restored”, former abbot’s tower, which dates from 14th or 15th century.

The remains are a Scheduled Ancient Monument.